You are here: Home / MidEastGulf / Yemen: ballistic missile launched by Houthis on Mecca 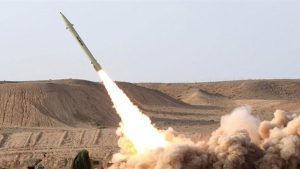 The Command of the Arab Alliance in Support of Legitimacy in Yemen said that its air defense forces successfully intercepted a ballistic missile launched by Houthi militias in the direction of the Holy city of Mecca, in a desperate attempt to disrupt the Hajj season, like reported by aawsat.com.

“The air defense forces of the Alliance in Support of Legitimacy in Yemen were able on Thursday evening to intercept a ballistic missile launched by the Houthi militias towards Mecca,” the command said in a statement.

The interception operation took place over Al-Wasliya area in Al-Taif province, some 69 km away from Mecca, but did not cause any damages, the alliance added.

The alliance command confirmed that the non-stop trafficking of missiles into the Yemeni territories was due to the absence of any control or monitoring system at Al-Hodeida port, in addition to the misuse of permits, which the alliance was granting to relief and goods shipments.

The alliance said the lack of control at the port comes at a time when the international community fails to take decisions to prevent such violations, which prolong the war and endanger the lives of civilians.

In its statement, the alliance reiterated its support for the decision of the legitimate Yemeni government based on the endeavor of UN envoy for Yemen Ismail Ould Cheikh Ahmed to impose control on the vital sea outlet.

Last October, the Saudi Air Defense was able to intercept a ballistic missile launched by Houthi militias from the province of Saada towards the Mecca area.

The coalition destroyed the ballistic missile about 65 km away from Mecca without causing any damage.

The Houthi behavior had caused a wave of Islamic, Arab and Western reactions as a response to the ballistic missile, saying Mecca was a red line.