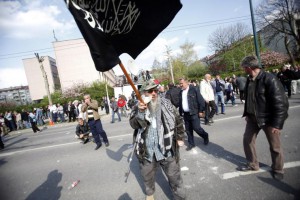 Officials from Bosnia Herzegovina said as many as 50 women and children are currently living, some fighting, with the Islamic State group in Syria. Their recruitment into the Sunni extremist organization comes as a direct result of the rising number of ISIS supporters in the country and their susceptibility to extremism, a trend that is threatening the stability of the entire region, officials said.

“Once a destination country for foreign fighters in the 1990s, Bosnia is now the country of origin for volunteers in other people’s wars,” said Vlado Azinovic, a co-author of a report published this month by Atlantic Initiative, a Sarajevo nonprofit.

The report said  192 Bosnian adults and 25 children traveled to Iraq and Syria from 2012 to 2014. Of those, 156 had gone there to fight. Those statistics make Bosnia one of the largest groups of foreign jihadists from Europe, prompting officials in the country to crack down on extremists.

Another report published by the European Parliament in 2013 showed about 3,000 people in Bosnia identified as Wahhabists, a conservative Muslim movement introduced in the country in the early ’90s. They are the ones, Bosnian officials have said, who identify with ISIS.

In the past year, Bosnia has arrested dozens of people on suspicion of having traveled to Iraq and Syria to fight with ISIS, or who are thought to be providing the Sunni militant group with weapons and cash. Bosnia last year passed a law that bans citizens from fighting in foreign countries.

Bosnia is just one of several countries in the Balkan region attempting to curb the number of foreign fighters flowing through their borders and recruiting domestically. The Balkans are becoming a transit point for foreigners who want to fight with ISIS. In the past several months, authorities in Bosnia, Kosovo and Bulgaria have arrested foreigners allegedly working for ISIS.

Islamist foreigners wanting to reach Iraq and Syria to fight with ISIS are flocking from places like Morocco to Europe and then on to the Balkans, before heading to Turkey to pass through the border to the battleground. Moroccan authorities said more than 2,000 nationals, many of whom passed through the Balkans, are now fighting in Syria and Iraq with ISIS.

Those fighters flowing from the Balkans into Syria through Turkey are also returning home, officials said, and that is what is causing concern.

The international community, especially those in the U.S.-led coalition to fight ISIS — such as Croatia, Bulgaria, Romania, Bosnia, Kosovo, Macedonia, Montenegro and Serbia — have repeatedly called on Turkey to do more to stop foreign fighters from flowing across its borders.

Eastern Turkey, including the cities of Antakya and Kilis, is a main transport hub not only for foreign fighters into Syria, but also for weapons, money and supplies. Turkey provides the main and easiest path into Syria and onto Iraq. ISIS has demolished the border fence between the two countries.

Foreign fighters looking to join ISIS in Syria cross into the country much like journalists, aid workers and moderate rebels have done for more than three years: through the Bab al-Salama or Bab al-Hawa border crossing in southeastern Turkey.

Most fly into Istanbul before catching a flight to Hatay or Gazientep where they meet with the group or individual whom they have contacted to take them into Syria. Journalists call this local contact who helps them on the ground a “fixer.” For ISIS, the process and terminology are similar. ISIS foreign fighters, via connections with those they know in the militant group, connect with a fixer to drive them from Hatay province to the Syria border.

The foreign fighters exit the same way they enter.

“Turkey has already taken additional steps. We’ve worked closely with them, and again, we think there is more that can be done by all members of the coalition to stop the flow of foreign terrorist fighters. Turkey does have the will to join with us in the fight against ISIL,” he said.