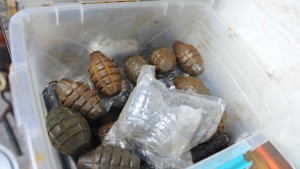 Bahraini security forces have discovered a large bomb-making factory and arrested a number of suspects linked to Iran’s Revolutionary Guards, the interior ministry said on Wednesday.

The report comes as part of campaign by security forces to crack down on militants behind recent bomb attacks on security forces that had killed or wounded several people this year. Last July a bomb killed two policemen and wounded six others in the worst attack of its kind in months.

The interior ministry said that the bomb-making facility in Nuweidrat, a residential district south of the capital Manama, contained more than 1.5 tonnes of high-grade explosives, making it one of the biggest finds in the kingdom.

“The facility had been adapted to accommodate an elaborate network of hidden underground bunkers and an above-ground manufacturing operation,” the statement said.

“This significant discovery marks yet another disturbing incident in which relentless Iranian actions are attempting to undermine security and stability within Bahrain and the wider region,” he said in the statement.

“The sophistication of terrorist-related incidents in Bahrain has increased markedly during 2015, and the

professionalism with which these materials are manufactured, concealed, and deployed is a clear indication of international support and sponsorship,” he added.

Iran denies involvement in any violence in Bahrain.

In March, Bahrain’s public prosecutor said it seized bomb-making equipment being smuggled from Iraq aboard a passenger bus for use in attacks in the Gulf Arab kingdom.

Bahrain, which is home to the US Navy’s Fifth Fleet, was swept by protests during the 2011 “Arab Spring” uprisings in which Shi’ites demanded political reforms. The government has denied any discrimination.