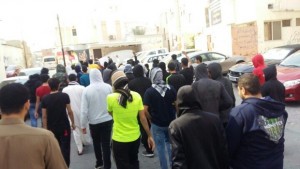 Bahraini security forces clashed with supporters of the country’s Shia Muslim spiritual leader near his home on Wednesday, activists said.

Videos and photographs posted by activists online appeared to show around a dozen police vehicles and armoured cars in Diraz village where Ayatollah Isa Qassim lives surrounded by youths maintaining a round-the-clock vigil to prevent his arrest.

The videos and still images, whose authenticity could not be immediately confirmed by Reuters, showed the police firing tear gas at stone-throwing protesters.

Qassim is the Shia majority’s most revered cleric and his treatment by Bahraini authorities has repeatedly drawn rebukes of the island kingdom’s Sunni-led government by Shia Iran as sectarian rancour continues to divide the region.

The Bahraini interior ministry appeared to refer to the incident in a statement on its official Twitter account.

“As part of efforts to preserve security and enforce the law, court orders to arrest wanted people in certain villages and to search their homes were implemented this morning.”

Government officials could not immediately be reached for comment and it was unclear whether they sought to detain Qassim.

Qassim went on trial for money laundering in June and faces expulsion from the country after authorities revoked his citizenship in May for fomenting violence and alleged ties to foreign powers – an apparent reference to Iran.

The ayatollah and his supporters have denied the charges.

The island kingdom has been hit by unrest since 2011 “Arab Spring” protests led by the Shiite community were repressed by force with help from Gulf Arab neighbours.