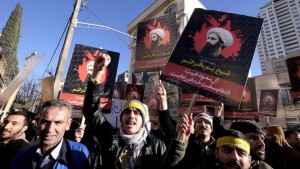 Bahrain has followed Saudi Arabia in severing diplomatic ties with Iran and ordering Iranian diplomats to leave the country within 48 hours.

The decisions come after protesters in Iran hurled petrol bombs at the Saudi embassy and stormed the building in the early hours of Sunday.

They were angry at the execution of prominent Shia cleric Sheikh Nimr al Nimr by the Sunni-led Saudis.

Iran has accused Saudi Arabia of using the attacks on its embassy in Tehran to deliberately stoke “tensions” in the region.

“Saudi Arabia, which thrives on tensions, has used this incident as an excuse to fuel the tensions,” foreign ministry spokesman Hossein Jaberi Ansari said in televised remarks.

The ministry also said Iran was committed to protecting its foreign diplomatic missions.

“Iran has acted in accordance with its (diplomatic) obligations to control the broad wave of popular emotion that arose,” Mr Ansari said.

The protesters lit fires and smashed furniture in the embassy before being cleared out by police, who arrested 40 people.

No Saudi diplomats were in the embassy at the time and all have now been called home.

The 56-year-old was a driving force behind anti-government protests in Saudi during the Arab Spring of 2011.

He was put to death along with 46 other prisoners on Saturday, sparking widespread demonstrations and criticism.

Riyadh has insisted that the death penalties were part of a justified war on terrorism.

There has also been sectarian anger in eastern parts of Saudi, with hundreds of Shia Muslims marching through the streets and demonstrations spread to other countries, including Turkey, Pakistan, India and Lebanon.

Police fired tear gas at demonstrators in Bahrain, while in the eastern Iranian city of Mashhad, the Saudi consulate was the scene of protests.

Most of those executed on Saturday were detained after a series of attacks by al Qaeda between 2003 and 2006 in which hundreds of people were killed.

All but two – an Egyptian and a Chadian – were Saudi nationals.

Britain’s Treasury minister David Gauke said the executions were “wrong”, but he defended the UK’s close relationship with the Saudi regime.

He told Sky News’ Murnaghan programme: “When it comes to protecting British people, the Prime Minister has made it clear that intelligence from Saudi Arabia has helped save lives and protect people in the UK …

“We have a relationship with Saudi Arabia where we are able to speak candidly to them, where these issues are raised on a regular basis by the Foreign Secretary and the Prime Minister and our representatives in Riyadh.”