You are here: Home / MidEastGulf / Bahrain on ISIS Radar? 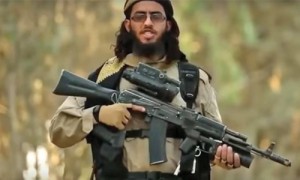 While it’s steadily losing  territories around the world, the Islamic State Group or the Daesh has once again managed to come up with something insane to continue it Pizzazz. This time with it ‘Target Bahrain’ mantra!

Video clips urging supporters to unleash attacks on Bahrainis and the American Military personnel  stationed in the Kingdom are now doing the rounds on various social media platforms for the past few weeks. The ISIS video, posted online, shows a man, claiming to be a Bahraini, calling upon the people of Bahrain to “follow the right path and join Jihad”.

Apparently filmed in Homs, Syria, the video shows the man in military uniform giving Bahrainis two choices: “to live in disgrace or to join Jihad”.

Speaking in a dramatic ‘poet voice’, the man who is named “Abu Yaqoub Al Bahraini” said: “Jihad should be performed whether in Al Basra, Sitra or Bani Jamra, and in Baghdad, Muharraq or Arad”.

In a bid to create sectarian tensions, the man, in the  video, urges the Sunni sect here for jihad against people of the Shia sect as well as against the western military troops in the Kingdom.

Bahrain is part of the anti-ISIS coalition and is home to the 5th fleet of the US Navy as well as the British naval base.

The clips are shared and viewed by thousands of internet users, even though they were removed briefly, only to be reposted multiple times on the You Tube.

The videos were also aired by a couple of Lebanon-based news channels.

In his response to the video via. MilitaryTimes, Cmdr. Bill Urban, a 5th Fleet spokesman, said officials were aware of the video, but declined to discuss possible security measures the Navy might have taken.

While the US Embassy in Manama acknowledge that they are aware of the threat to MilitaryTimes, the Bahrain Government, according to Associated Press, said it “remains vigilant against terrorist activities and extremism”.

Collective action against extremism was also the main theme of the recently concluded GCC Summit, which hosted British Prime Minister Theresa May and several key leaders from the GCC and the Middle East.

The summit also viewed that the defeat of ISIS in Iraq and Syria will likely worsen the threat in other parts of the world in the way of returning fighters.