You are here: Home / MidEastGulf / Bahrain jails 5 people for terrorist attacks against police

High criminal court sentences three defendants to 15 years each after convicting them of setting interior ministry vehicle on fire. 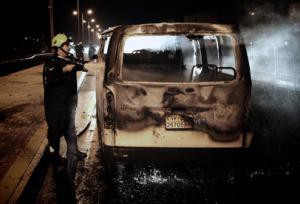 Bahrain jailed five people for up to 15 years on Monday for “terrorist” attacks against police in the Sunni-ruled Gulf kingdom that has been shaken by Shiite-led unrest since 2011.

A high criminal court sentenced three defendants to 15 years each after convicting them of setting an interior ministry vehicle on fire, the prosecutor in “terrorist” cases, Ahmed al-Hammadi, said.

They were also collectively fined more than 17,000 dinars ($45,000), said Hammadi in a statement published by the official BNA news agency.

No casualties were reported in the attack that took place in August last year.

In another case, the same court jailed two defendants, one for three years and the second for 10 years, after convicting them of rioting and throwing explosives and rocks at police last April.

Bahrain, just across the Gulf from Iran and home to the US Fifth Fleet, has seen frequent clashes between protesters and security forces in Shiite villages.