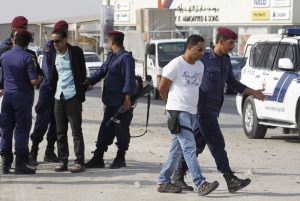 Bahrain said it had broken an Iranian-linked “terrorist cell” suspected of involvement in a bomb attack on a police bus in February and plotting to assassinate senior officials, state news agency BNA reported according to rabnews.com.

The agency quoted an Interior Ministry statement as saying that the 14-member cell was working under direct supervision from two exiled Bahrainis living in Iran, one of them recently designated by the United States as a “global terrorist.”

BNA said that six of the arrestees received military training in camps under Iranian Revolutionary Guard supervision, five had been trained by the Iraqi Hezbollah group and three received training in Bahrain.
They are suspected of a bomb attack on a bus in February that injured five police officers, the agency said.
The group is also suspected of plotting to attack “senior officials,” the statement said but gave no further details.
It said weapons, locally-made explosives and communication equipment had been seized from the homes of the suspects.

The statement said the cell was being financed and directed from Iran by Qassim Abdullah Ali and Mortada Majid Al-Sanadi. The US State Department in March labelled Sanadi and another Bahraini identified as Ahmad Hasan Yusuf as “Specially Designated Global Terrorists.”

Earlier this month, Bahrain announced it had uncovered a group comprising 54 members suspected of involvement in attacks on security forces, including organizing a prison break in January, and seizing automatic weapons.

Bahrain in February executed three men convicted in the death of three policemen, including an Emirati officer, in a 2014 bomb attack.