You are here: Home / MidEastGulf / Baghdad’s response to Turkish troops in Iraq 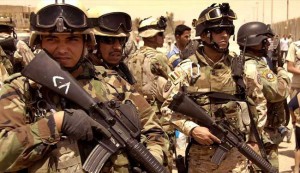 The Iraqi government has finally decided to become very agitated over something other than Kurdish oil being sold on the open market, Turkish troops in the north training Peshmerga. While content to have a reported 30,000 Iranian forces in Iraq alongside tens of thousands of Shia militia, whom the Iranians control, the Abadi government is hell bent on removing 150 Turkish trainers. While unable to remove ISIS from Iraq the Iraqi government has gone so far as to threaten to us force against Turkey.

What is the real reason Turkey has troops in Iraq and why is Baghdad so upset? In a word, Kurds. It is always Kurds for the Turks and will always be for Baghdad.

It is becoming abundantly clear that there will be a free and independent Kurdish state on the border with Turkey. It most likely will be, at least in part, the area now controlled by the autonomous Kurdistan Regional Government, and it will come sooner rather than later. Depending on how events transpire it could include Rojava. The removal of ISIS from Mosul will be required and that is beyond the capabilities of Baghdad or, on its own, Erbil. Turkey has the capacity but will need a reason. It is likely that non-regional forces will be needed. Should Mosul be liberated by forces other than those under Baghdad’s control it will be lost to Iraq.

Turkey, regardless of political considerations, has a vibrant economic connection with Iraqi Kurdistan becoming more so as the KRG continues to exploit oil and natural gas discoveries and sells to Turkey, which in the past was dependent on Russia for at least natural gas. With the recent election results in Turkey it is also apparent that the Kurds of Turkey are coming into their own politically and may see their way past the violence which has consumed the region for three decades.

Baghdad on the other hand also sees Kurdish oil and natural gas, but sees its revenue leaving Iraq. As the west becomes more and more dependent on Kurdish fighters as the spearhead against ISIS Baghdad’s leverage with the west lessens as well as it becomes more and more dependent on Iran for protection and money. Western nations are already planning or currently simply supply the KRG directly with military aid.  This will become more of a factor should the rift between Turkey and Russia widen as Russia expands hegemonic control in the Middle East.

While requesting NATO to pressure Turkey and asking for UN intervention through the Security Council, Baghdad is playing a weak hand. NATO and the UN see the major crisis’s in the region as ISIS and the Syrian civil war. Baghdad has not shown itself to be capable of being a major player in either. While Turkey has a schizophrenic relationship with ISIS it is definitely no friend of Damascus. While Turkey’s relationship with the Kurds has been strained, at times to the breaking point and beyond, there is mutual benefit in working together.

The economic ties between Erbil and Ankara may help to smooth the road to Kurdish independence and rapprochement with Rojava. The PKK problem will need to be solved, not by Erbil but by Ankara and the PKK. The level of cooperation between Ankara and Erbil is warming, while that between Erbil and Baghdad is at a very low level. In the midst of Baghdad’s call for Turkey to withdraw the KRG leader, Masoud Barzani visited Ankara and was photographed being greeted under a portrait of Ataturk with a Kurdish flag displayed. Later the Kurdish flag was also evident when Barzani meet with PM Ahmet Davutoğlu. This is not just a major gesture but a huge indicator of a changing political reality.

All of this leaves the outcome of the current Turkish troop deployment unknown. I would predict that the US will work behind the scenes to resolve the problem and that Russia will be very upfront in condemning the Turkish invasion of Iraq. Since the Turks on training KRG forces from both KDP and PUK in KRG controlled areas it is likely to come down to how well Erbil and Baghdad can resolve their differences, and as pointed out the relationship is already strained.