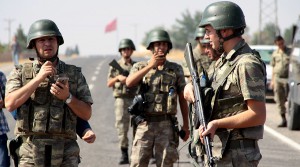 “NATO must urge Turkey to withdraw its troops from Iraqi territories,” the broadcaster quoted al-Abadi as telling the NATO chief, as a 48-hour deadline set by Baghdad for withdrawal of the Turkish troops from northern Iraq expired.

Turkey said earlier that it will halt further deployments in Iraq but is not withdrawing its troops from the neighbouring country, a Turkish government spokesman said.

“There is currently no withdrawal, but transfers have been stopped,” Tanju Bilgic, a spokesman for the Turkish Foreign Ministry, was quoted as saying by broadcaster CNN Turk.

Prime Minister Ahmet Davutoglu said he would plan a visit to Baghdad “as soon as possible,” in what appeared to be a bid to calm tensions.

The Iraqi government issued an order for Turkey to withdraw its troops by late Tuesday or it would turn to the UN Security Council. The government renewed its call just hours before the deadline expired.

Turkish officials say the country has less than 1,000 troops in northern Iraq for the purpose of training fighters to take on the Islamic State extremist group or to protect those undertaking the effort.

Turkey sent forces last week to the Bashiqa region of northern Iraq, saying this was a routine rotation of its trainers. The government in Baghdad insists this was done without its permission.

The United States and Germany have been urging de-escalation, with a US official insisting the sides focus on fighting Islamic State.

Al-Abadi is under pressure from Shiite militias angry over foreign troop deployments in Iraq.