You are here: Home / MidEastGulf / Ayatollah publishes book calling to wipe out Israel, give Iran full reign in the Middle East 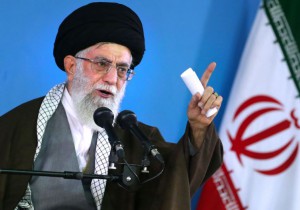 The supreme leader of Iran is apparently now an aspiring author but one thing is for sure: this is no love story.

According to a report on Saturday in the New York Post, Ayatollah Ali Khamenei’s new book Palestine outlines his case for why Israel must be wiped out and how. “The solution is a one-state formula,” he writes, which is called “Palestine.”

He said this “practical and logical mechanism”  would have Israel under Muslim rule with some Jews being allowed to stay as a “protected minority” but only after proving “genuine roots.” He advocates strict apartheid against Jews saying that they would not be allowed to vote in a future Muslim state while Arabs would have full rights.

He claims that his plan would promote “the hegemony of Iran” while removing “the West’s hegemony” from the Middle East.

Khamenei, who is described in the book as “the flagbearer of Jihad to liberate Jerusalem,” wrote that his views are not anti-Semitic but Islamic and based on “well-established Islamic principles.” This goes on the opinion in Islam that land which was once owned by Muslims can never be ruled by non-Muslims again. Along with Israel, this also includes Russia, many parts of Europe, Thailand, India and parts of China and the Philippines.

However, Khamenei singles Israel out as an adou [enemy], doshman [foe] and a “cancerous tumor” for several reasons, the first of which is for being an “ally of the American Great Satan” which is waged in a war to overtake “the heartland of the Ummah [nation].”

Second, he says Israel is singled out because of his claim that it has waged a war on Muslims and therefore has become a kaffir al-harbi [hostile infidel].

Khamenei says his plan entails low-intensity warfare based on wearing down the patience of Israelis and the international community. He writes that this plan does not entail “classical warfare” and he supposedly does not want to kill Jews.

His plan goes on the assumption that all Israelis have dual citizenship and would rather live in the US or Europe.  He recommends therefore to make life in Israel so uncomfortable that they leave voluntarily to avoid threats on them.

He then describes using the tactic of “Israel fatigue” wherein the international community would decide to stop supporting Israel’s military programs.

Another section of the book boasted past Iran-supported warfare against Israel using examples from Gaza and Lebanon. He writes that he aims to recruit West Bank “fighters” in units modeled after Hezbollah.

“We have intervened in anti-Israel matters, and it brought victory in the 33-day war by Hezbollah against Israel in 2006 and in the 22-day war between Hamas and Israel in the Gaza Strip.”

Though he doesn’t reference an Iranian nuclear program directly, he mentions that a nuclear Iran would be able to deter Israel from taking any military action against the Islamic republic.

Referring to the Holocaust, Khamenei called it a “propaganda ploy” and writes that “we don’t know why it happened and how.”

The 416-page book is currently only available in Iran in Persian, but apparently an Arabic version is on the way.