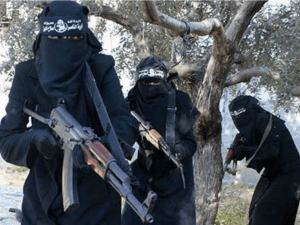 Unconfirmed anecdotal reports claimed that female suicide bombers had been increasingly used in suicide improvised explosive device (IED) attacks throughout 2017 in Iraq and Syria, but this is the first evidence of women engaging in combat.

The video showed three women, fully covered in black, fighting alongside male jihadists on the front line, most likely in eastern Syria.

The video focuses on the Islamic State offensive the group launched in January against Kurdish forces in eastern Syria under the name “Avenging Virtuous Females”, through which, according to the narrator, women “are seeking revenge for their religion and for the honour of their sisters imprisoned by the apostate Kurds”.