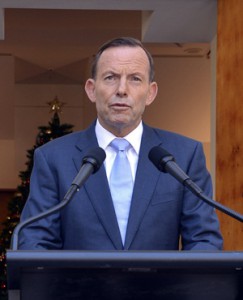 “Daesh is coming, if it can, for every person and for every government with a simple message: submit or die,” he said at the Countering Violent Extremism summit in Sydney.

Abbott was using a term based on the Arabic acronym for the movement that has seized a swathe of northern Syria and Iraq and proclaimed an Islamic caliphate.

The group has branches in Libya, Afghanistan and the Horn of Africa, Abbott said, and is trying to establish a presence in South Asia

The two-day conference was attended by some 27 ministers and officials from the region, with a focus on fighting online radicalisation, which Abbott called a “Hydra-headed monster”.

“The conflict in the Middle East is reaching out to us even in suburban bedrooms,” Abbott was quoted as saying by The Australian newspaper.

“What we’ve seen in Australia, quite young adolescents, almost children have been radicalised online by participating in chat rooms with people around the world.”

Abbott praised the Malaysian Prime Minister Najib Razak for saying the movement was unacceptable under Islam, and other Muslim leaders for questioning extremist interpretations of the scriptures.

Social media executives, including from Google, Twitter and Facebook, also attended the meeting to address the flow of propaganda from ISIS, which can reach 100 000 pieces per day, the report said.

Australia estimates around 100 of its citizens are fighting alongside militants in the Middle East.

It has barred suspect individuals from travelling to the region, and proposed other measures including the withdrawal of Australian passports from dual citizens found fighting with the extremists.