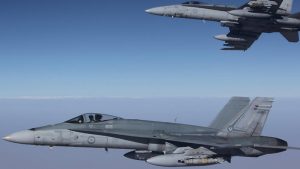 The battle to recapture Islamic State’s defacto capital Raqqa in Syria is officially under way and Australian air crews are among the coalition personnel in the skies conducting strike operations, like reported by sbs.com.au.

US Lieutenant General Steve Townsend predicts the fight for Raqqa will be long and difficult, but the offensive would deliver a decisive blow to the idea of IS as a physical caliphate.

“It’s hard to convince new recruits that IS is a winning cause when they just lost their twin capitals in both Iraq and Syria,” he said in a statement.

The US-led coalition has said 3000-4000 IS fighters are thought to be holed up in Raqqa city, where they have erected defences against the anticipated assault.

The city is about 90km from the border with Turkey.

IS captured the city from rebel groups in 2014 and has used it as an operations base to plan attacks in the west.

A spokesman for the Australian Defence Department confirmed the RAAF air task group, which includes six F/A-18 Hornets, is conducting operations in eastern Syria, including near Raqqa.

“Importantly, operations are conducted according to international humanitarian law and all precautions are taken to avoid civilian casualties,” he said.

Australian defence personnel are also continuing with efforts to combat IS in western Mosul, Iraq, which is close to being liberated.

Australia has 780 defence personnel in Iraq and Syria, carrying out air strikes, special operations, and training Iraqi soldiers and police.