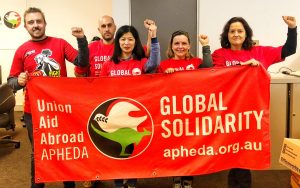 A Palestinian aid group that employs and supports the leader of an Islamic terrorist group in Gaza is being funded by Australian taxpayers, it has been alleged, like reported by breitbart.com.

The claim is contained in a report in the Sydney Daily Telegraph published Wednesday.

The newspaper alleges the Department of Foreign Affairs and Trade has donated $21 million in the past decade to a Sydney-based charity set up by the unions, Union Aid Abroad — APHEDA.

This charity then sent millions of dollars to the MA’AN Development Centre — a Palestinian organisation that employed a leader of the Popular Front for the Liberation of Palestine (PFLP). PFLP has been on the official terror lists of the United States, European Union and Canada as a result of its hijacking of planes, assassinations and suicide bombings.

Australia’s Foreign Minister Julie Bishop has announced an audit of the union funding to begin imediately.

The accusation follows Australia’s call earlier this month for assurances from the Palestinian Authority that Aus­tralian aid has not funded payments to terrorist “martyrs” or their families.

The Palestinian Authority has in the past been accused of dispersing stipends or “martyr payments” of up to $US3500 ($4600) a month to the families of those killed while attacking Israel.

In 2017 alone, the Palestinian Authority’s budget showed a “huge increase” in the funding of salaries for imprisoned terrorists and the families of “martyrs,” according to an Israeli research institute.

Ms. Bishop said such payments are in conflict with Australian values and a letter to the authority demanding answers was sent from Canberra this week.

“Obviously that is completely at odds with Australian values,” an official from the Department of Foreign Affairs and Trade (DFAT) told a Senate estimates hearing.

“So on the 29th of May our Foreign Minister has written to her counterpart raising concerns about these payments that show up in the Palestinian Authority’s budget and seeking assurances that the Australian funding (does not) in any way enable or encourage acts of violence.”