You are here: Home / Senza categoria / Australian military deployment in Middle East to last up to three years 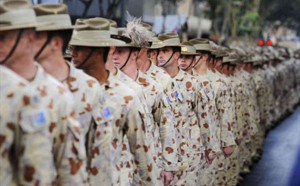 Prime Minister Tony Abbott has done some diplomatic heavy lifting with the 15 other national leaders at the Pacific Islands Forum, but his attention has been somewhat divided, with one eye on the Middle East.

Mr Abbott previously claimed that the deployment of Australian soldiers to the war-ravaged region would be a matter of months and not weeks, but now Defence Minister Kevin Andrews has stated Australia’s involvement will likely be two to three years.

“We don’t really want to put a particular timeline on this, so that they’ll be there as long as needed but no longer than necessary,” Mr Abbott said at a press conference.

The end of Australian deployment however will not signal an end to the present humanitarian crisis in Syria – so long as the Russian-backed Assad regime remains in place.

“The Assad regime is a dreadful regime, it’s been absolutely monstrous to its own people,” Abbott said.

“We think the Assad regime should go.”

But even if this is achieved through diplomacy rather than military action, the issue of the ISIL thread remains.

“If Assad were removed, if Assad were to leave, who would take his place?” Foreign Minister Julie Bishop said.

“One would not want to leave a vacuum that would give Daesh the opportunity to expand its ambitions further.”

The Greens and refugee groups now want the government to speed up the processing of Syrian asylum seekers in Nauru and Manus Island detention centres.

“Their circumstances are no different to any other refugee who has fled Syria,” Lebanese Muslim Association spokeswoman Widyan Fares said.

Mr Abbott has firmly denied the possibility of this happening.

“There’s a world of difference between people in that situation and people who have done a deal with people smugglers,” he said.
Read more at http://www.9news.com.au/national/2015/09/10/18/35/australian-military-deployment-in-middle-east-to-last-up-to-three-years#yptVAYECKXEwSmI5.99