You are here: Home / Senza categoria / Australian FM calls on EU to carry out anti-ISIL airstrikes in Syria, Iraq 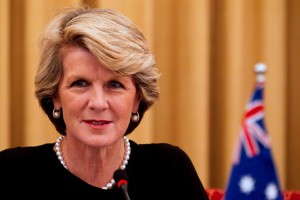 “Countries adjoining Syria and Iraq, Lebanon, Jordan and others are bearing the brunt of millions of people fleeing into their borders and then into Europe. That’s why I believe the Europeans must be involved in the coalition airstrikes and the effort in Syria and Iraq,” Bishop told The Australian in an interview.

Later in the week, the Australian government will review the United States’ proposal to extend the Australian offensive against ISIL targets in Iraq to Syria.

ISIL has seized large parts of Iraq and Syria. The group’s positions are currently targeted by airstrikes conducted by the US-led international coalition, while Iraqi, Kurdish and forces are fighting the militants on the ground.Europe is facing a major inflow of undocumented immigrants with thousands fleeing violence from North Africa and the Middle East.