You are here: Home / MidEastGulf / Australia to send another 330 soldiers to Iraq 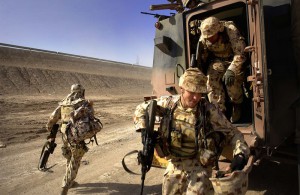 Australia will send another 330 soldiers to Iraq on Wednesday, April 15, in a training mission set to last two years, BBC News reports.

The mission’s purpose is to help train the Iraqi army so that it can gain and hold ground against Islamic State (IS) militants, he said.

The mission, to be based about 30 miles north of the capital Baghdad, is expected to be operational by May.

The deployment was first announced in March.

“We won’t have a combat role. It is a training mission not a combat mission,” Abbott told journalists at a press conference in Canberra on Tuesday. “I can’t tell you that this is risk free.”

“The work of the coalition against the Islamist death cult has been effective,” he went on, referring to IS.

“We have seen the Iraqis retake [the city of] Tikrit… we have seen incremental gains by the Iraqi forces and the Kurdish forces,” he said, while conceding that large swathes of Iraq remained out of the Iraqi government’s control.

He said IS was not just terrorizing Iraq and Syria “but is reaching out to Australia”, making Australia’s involvement in the conflict an issue of national security.

The Australian government estimates that about 90 Australian citizens are fighting with IS in Syria and Iraq and another 140 citizens in Australia are offering the group support.

The new training mission will be formally reviewed after 12 months.