You are here: Home / MidEastGulf / Australia to bomb Syria? 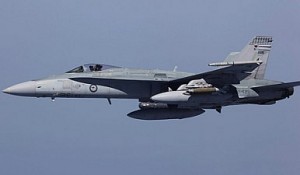 The U.S. has asked Australia to help bomb Syria, in a letter delivered to the embassy in Washington. Fairfax Media has reported that “the driving force for the formal request received last week from the United States for the RAAF to join the air campaign in Syria came more from Canberra – and in particular the Prime Minister’s office – than from Washington.” At least according to senior government sources. Australian Prime Minister Tony Abbott has denied the claim.

At a press conference during his North Queensland trip Wednesday Tony Abbott said that in fact the original request had come during a phone conversation with U.S. President Barack Obama about the Trans-Pacific Partnership on July 17, when he also called to give his condolences for the Chattanooga shooting.

What Australia will do will be decided next week by the National Security Committee of Cabinet. Neither Leader nor Deputy Leader of the Opposition, Bill Shorten and Tanya Plibersek, respectively, have come out strongly for or against the move, as they wish to know more. Leader of the Greens, Senator Richard Di Natale, is against, carrying on from his predecessor Christine Milne’s opposition to strikes in Iraq, and Independent Tasmanian MP Andrew Wilkie has said it would be “one of the most reckless things this government has ever done.” Wilkie likewise was against involvement in Iraq. Former Labor foreign minister Bob Carr, who has been quoted widely in Australian media, is strongly in favor: “The West has really got a moral obligation to act where it can be argued there’s a chance of saving civilian populations from the mass atrocity crimes that seem to follow very quickly when IS takes control of territory.” So far, so many political soundbites.

Analysts and defense experts or former defense personnel interviewed have a slightly different take. “Not a game changer” (Chief of Joint Operations for the Australian Defence Force, David Johnston), “negligible,” “a sideshow,” or “puzzling” came up. Why? Australia’s actual contribution may not be that large, there are few military targets in the parts of Syria Australia would be bombing, an air campaign may not be the best strategy, Syria is very different to Iraq and complicated by the fact of its lengthy civil war, and it may also present greater dangers to Australian soldiers, without immediate or concrete gains. Also, and this is something Carr has pointed out too, there is no UN Security Council mandate nor invitation from dictator Bashar al-Assad.

What lengthier commentaries by analysts have noted is the situation in Syria and the wider region is a very complex one (if it is even one situation). Rodger Shanahan at the Lowy Institute’s Interpreter blog has said that much of this is a regional issue and Australia tagging along on a Western-only effort (“particularly given that the number of sorties our six F-18s will contribute is likely to be minimal”) is less helpful than seeing what the Arab League might also like to do and “what assets regional states are contributing to the air campaign in Syria, and what pressure Australia will put on them to be an active participant against an enemy that has already attacked them, and attracted thousands of their countrymen to fight with them.” Otherwise, why is Australia throwing itself into an area it where cannot contribute much and does not know well?

Allan Behm, a former head of the International Policy and Strategy Divisions in the Department of Defence has told Fairfax that this role in Syria would not do much, calling it a “sideshow.” In a piece at the Australian Strategic Policy Institute’s Strategist blog he expanded somewhat. Comparing this to the faulty intelligence that compelled Australia to go to Iraq, and then the poor decision to stay there, he wrote, “the Abbott government seems again destined to make the wrong decision for the wrong reason.

Behm’s argument is that throwing a few bombs at Syria won’t do much when this is all a wider issue of civil war and problems stemming from a variety of complex issues, from poverty to general disenfranchisement. In fact, this is not that far from much of what was talked about at the relatively recent Countering Violent Extremism Summit held in Australia, which espoused, with government approval and backing, a “kindler and gentler” kind of counter terrorism. Using the UN for peacekeeping and humanitarian issues in the region, or going in hard with ground forces, might be the two better options than aerial strikes alone.

However, Abbott’s enthusiasm for this project is well known. He was committed to going after ISIS even before the U.S. had shored up a plan and Australia committed 300 troops to Iraq some months ago. Speaking Wednesday, he did make the point that working with other Middle Eastern nations was important.

“It is very important that we do whatever we reasonably can in partnership with our Middle Eastern and other allies to destroy the Daesh death cult. I’ve long thought that while the legalities are different, the moralities of this issue are the same on either side of the border,” Abbott said at his Wednesday press conference. Parsing morality might be one thing but it remains that Iraq and Syria are different situations.

Then again, Abbott is not known for letting the facts get in the way of a good defense for an attack. Defending his then-government’s support for the invasion of Iraq in a 2004 speech to the Young Liberals (among many other things he also defended), he said, “As the secret burial grounds now reveal, he (Saddam Hussein) is the world’s biggest mass murderer since Pol Pot (and who complained when the Vietnamese army removed him?)…” Who complained? Start with the Americans, move on to the Chinese (who invaded northern Vietnam as a reprisal), and look at opposition politician Sam Rainsy and much of the Khmer commentariat today, to begin with.

Meanwhile, Australian Foreign Minister Julie Bishop has said that she would talk to Iran regarding strikes, telling Fairfax that the Australian government would consult with a number of other nations about the U.S. request, including Iran. Bishop visited Iran in April, the first high-level Australian visit in ten years, where she spoke about intelligence sharing regarding matters like Australians fighting for ISIS in Iraq.