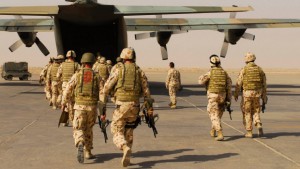 AAP reports that Australian Foreign Minister Julie Bishop said her government would consider sending more troops to help battle ISIS in Iraq, but the Iraqis have been oddly slow to request assistance, even as the Islamic State overruns cities and begins lining up an attack on Baghdad.

Iraqi Prime Minister Haider al-Abadi—currently huddled in a emergency meeting with coalition leaders in Paris to discuss the fall of Ramadi—said his country needs more international support “on the ground” to fight ISIS.

Bishop said Australia, already the “second largest contributor to the building partner capacity initiative after the United States,” has not been asked for more assistance. She thought Abadi would try to gain support from other coalition partners who have not contributed any troops yet.

AAP reports she also suggested formally inviting Iran into the anti-ISIS coalition, describing them as a “stakeholder” with an undeniable “military presence” in Iraq, but this was met with a “lukewarm response” from some other coalition members.

None of the foreign ground forces under discussion at this point would be combat troops; instead, they would provide training for the Iraqi military, advisers, and humanitarian aid. Australia currently has some 200 special forces operators and 300 other troops serving in that capacity in Iraq.

Based on Abadi’s comments in Paris, he seems particularly interested in getting more help from the international community to slow down ISIS recruitment efforts. “They have brought hundreds of new fighters, foreign fighters, well trained, well-armed,” he complained, saying the majority of Islamic State troops in Iraq were now of foreign extraction, presumably including fighters from the northern half of the “caliphate” in Syria.

“This is a transnational organization. We need all the support of the world, the intelligence of the world, and we are not getting it,” Abadi charged.

It looks like the finger-pointing between the Iraqis and the Obama administration after the fall of Ramadi is going to continue for a while longer. “In Iraq right now we have the right strategy – a combination of coalition air strikes, training, equipping, assisting and effective local partners,” insisted U.S. Deputy Secretary of State Tony Blinken, whose boss John Kerry managed to sideline himself in a bicycle accident. “That is the winning strategy.”

ISIS, on the other hand, seems to think the “winning strategy” involves routing Iraqi troops, seizing American weapons from them, and taking control of cities. Their latest move, according to CNN, was to shut down a dam north of captive Ramadi, “cutting water supplies to pro-government towns downstream and making it easier for its fighters to attack forces loyal to Baghdad.”

Iraqi officials explained ISIS is using its control of the Ramadi dams to deprive its enemies of water, while ensuring the city of Falluja, which they have also taken, is kept irrigated. They have also reduced the level of the Euphrates River enough to walk across it and “attack the pro-government towns of Husaybah and Khalidiyah as well as the large security forces base at Habbaniya.”  Hundreds of families are said to be fleeing those towns in fear of an imminent ISIS assault.