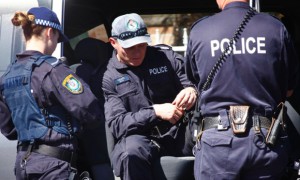 The Abbott government will unveil new counter-terrorism legislation following a series of allegedly foiled attacks in Melbourne in the past months, the federal attorney-general has announced.

George Brandis made the announcement on the second day of a summit on challenging terrorist propaganda in Sydney, which he said would focus on strategies to fight Islamic State’s “electronic army”.

He did not divulge details of the new legislation, saying only it would “take into account lessons learned from recent legislative amendments and counter-terrorism operations”, but they are understood to include changes to the control order regime.

Control orders allow police to restrict a person’s movements, activities and associations without requiring a criminal conviction. Two were issued in the first decade after the powers were granted to police, and another two were placed on individuals in December last year.

The past six months have seen 23 people charged following eight counter-terrorism operations, including alleged plots in Melbourne to coincide with Mother’s Day and Anzac Day.

Brandis told the regional countering violent extremism summit on Friday the internet had allowed Islamic State “to reach a mass audience with slickly produced videos of their shocking and barbaric actions”.

“They have deliberately set about creating sophisticated, branded products and developing an electronic army to reframe these conflicts in a way that somehow appeals to our vulnerable youth, in particular vulnerable young members of our Muslim communities,” Brandis told a ministers’ meeting.

The summit heard on Thursday from Google and YouTube’s head of government relations, Samantha Yorke, in a closed session.

The internet giant has been reluctant to censor Islamic State material that falls within its guidelines, but has encouraged governments and community and religious groups to use its open platform to create content challenging the material Isis and other extremist groups put online.

Rob Wainwright, the director of Europol, has estimated that Isis supporters send up to 100,000 tweets each day from more than 50,000 accounts.

The $21.7m campaign to counter Isis’s online appeal would focus on “questioning its inconsistencies and exposing its false allegations by bringing to light its brutality,” he said.

“For example, highlighting the experiences of foreign fighters when they get to Iraq and Syria, only to discover that what they were told would be a glorious adventure is actually an experience in savagery, sexual slavery, lawlessness, isolation and poverty.”

He acknowledged that Muslim communities felt targeted by the government’s measures and rhetoric on the issue. “Australian Muslims do not want to be portrayed as victims and yet they can feel the weight of judgment on them for the actions of others, in particular the actions of others in far away places,” he said.

“But failing to acknowledge that they are being targeted only serves to exacerbate the threat, a threat that must be tackled head on through partnerships and with positive and proactive measures.”

Leaders of Muslim organisations such as the Lebanese Muslim Association and the Australian National Imam’s Council were not believed to have been invited to the summit.

A communique will be issued at its conclusion, expected to highight the role of families and communities in countering violent extremism. “We know that well informed and well equipped families, communities and local agencies are best placed to recognise and to intervene in the early stages of radicalisation to violence,” Brandis said.

At least 175 Australians are known to have travelled to Iraq and Syria to fight with Isis and other jihadi groups, with 110 thought to still be in the war zone. Around 30 are thought to have returned and another 35 have been confirmed to have died.