You are here: Home / MidEastGulf / Australia and Iran agree to sharing of intelligence in battle against Isis in Iraq 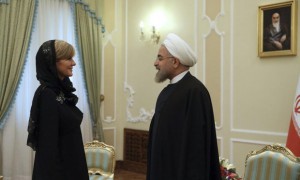 Bishop has been in Tehran for the first high-level talks between the countries in more than a decade.

She revealed the details of the cooperation after a meeting with Iran’s president Hassan Rouhani, describing it as an extraordinary deal that will have beneficial outcomes in the fight against global terrorism.

“During my discussions with the national leadership here it was agreed that we could share intelligence, particularly on the foreign terrorist fighters from Australia who are taking part in this conflict in Iraq,” Bishop said.

“It was an informal arrangement whereby we would share intelligence that would give us information on the Australians who are taking part and I believe that Iran has information that we would seek and they were very agreeable to share that information with us,” she said.

But the foreign minister would not comment on whether there was a conflict of interest in sharing information with Iran which could ultimately be used to capture or kill Australian fighters.

”I’m not going into those kind of details. That is obviously a matter of deep intelligence operational issue,” she said.

“They are in Iraq and places we are not. They also have a very sophisticated intelligence network and there’s a lot of information they have been gathering.”

The leaders agreed that the challenge posed by Islamic State, was one of the most significant global threats at present.

Australia has been negotiating with Iran on an information-sharing arrangement for a number of months, but the diplomatic push intensified following Sydney’s Lindt cafe siege in December, in which two hostages and the gunman, Man Haron Monis, were killed.

Bishop brushed aside concerns that the informal arrangement would strain relations with Israel and the United States.

Around 100 Australians are believed to be fighting for Isis or related groups in Iraq and Syria.