You are here: Home / Senza categoria / Australia: Abbott steps up calls for war as Turnbull 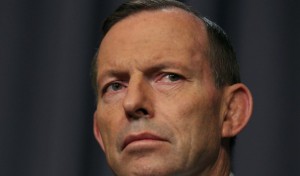 Tony Abbott has stepped up his call for military action inside Iraq and Syria to crush Islamic state and warned such a commitment could take decades.

Mr Abbott, in a speech delivered in Singapore on Wednesday night, said such action needed to involve international troops, including Australia, as well as local forces.

“A military victory over the caliphate isn’t a sufficient response to the challenge of militant Islam but it is a necessary one. The alternative is more attacks on decent people going about their daily lives until the resolve is there to escalate the military campaign against it,” he said.

“That’s the challenge: creating Iraqi and Syrian forces that can destroy the caliphate while respecting non-combatants; and, in the longer term, fostering governments in the Middle East that don’t commit genocide against their own peoples or permit terrorism against ours.

Mr Abbott warned such a commitment “will be a long, difficult and costly engagement, quite possibly the task of decades not years”.

“But before we shrink from such a prospect we should remember how much the world has gained from the US and its allies’ sustained, post-war willingness to stand up for universal values as well as for their own interests. The latest announcement, of 200 special operations troops to fight in Iraq and Syria, is a sign that America is finally edging towards the action needed to win this war.”

The repeat of the controversial call he made in the wake of the Paris attacks came just a day after his controversial comments at home about Islamic culture earned him condemnation from across the political spectrum.

Malcolm Turnbull and Bill Shorten said Mr Abbott’s comments about the inferiority of Islamic culture posed a national security risk and played into the hands of terrorists who were trying to create conflict with the Islamic communities in Western nations.

He said Mr Abbott had once lectured him that politicians should not be theologians. Mr Morrison said Islamic communities, including that in his own southern Sydney seat of Cook, “are already having those discussions and they are positive, progressive discussions”.

Mr Abbott has overshadowed the government’s agenda with his comments about the “massive problem” within Islam, made variously in a newspaper article and a television interview.

“Islam has never had its own version of the Reformation and the Enlightenment or a consequent acceptance of pluralism and the separation of church and state,” he said.

“It’s not culturally insensitive to demand loyalty to Australia and respect for Western civilisation,” he said. “Cultures are not all equal.

“We should be ready to proclaim the clear superiority of our culture to one that justifies killing people in the name of God.”

Mr Turnbull, who has struck a softer tone towards the Islamic community than Mr Abbott when he was prime minister, pointed out that this was the kind of inflammatory language Australia’s security agencies have asked politicians to avoid because it hampers intelligence gathering.

“Everything I say on this subject is carefully calculated in the light of the advice I receive from the Australian Federal Police and from ASIO,” the Prime Minister said.

“Everything I say on this subject is aimed to make Australia safer, and to make the work of our security services  … less difficult than it already is. It is a challenging environment in which they operate. Everything I say is designed to help them.”

Mr Turnbull said it was no revelation there were extremists in the Muslim world that were doing enormous damage to Muslims and non-Muslim alike.

He said groups such as Islamic State “want us to turn on the Muslim community in Australia, and indeed in every other country.

“That’s their objective, so we should not do anything that plays into their hands.”

Greens leader Richard Di Natale said Mr Abbott should get out of politics and take up fishing or golf.

Mr Abbott concurred that “demonising Islam generally, or all Muslims, could bring on the clash of civilisations that academic Samuel Huntington feared two decades back and make Islam’s bloody borders even more dangerous.

“But we can’t remain in denial about the massive problem within Islam,” he said.