You are here: Home / Senza categoria / Aussie troops ready for ‘chemical weapons attack’ in Iraq and Syria from Islamic State 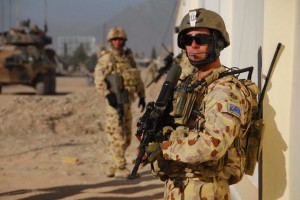 Australian Defence Chief, Mark Binskin, has warned Australia forces were preparing for a potential chemical weapons attack by Islamic State (IS) in Iraq and Syria.

During the Senate estimates on Wednesday, Mr Binskin relayed an update on the current operations in the Middle East.

He said Australian forces in air and training missions were prepared for a potential attack which could include chlorine weapons and sulphur mustard, or mustard gas, which is a blistering agent that causes severe burning when it comes in contact with skin, The Guardian reported.

“The one area that we have increased our force protection that’s been an emerging threat … is the use of some limited chemical weapons by Daesh,” Mr Binskin said.

Mr Binskin said Australian troops were not the target of chemical attacks, but, they still remained prepared.

“We have adapted our force posture to be able to respond to that [threat],” Mr Binskin said.

During his questioning in the Senate, Mr Biskin spoke about the cost of operation Okra.

In the 2014-15 financial year, the operation cost taxpayers $159.4 million and that figure was expected to rise to $390 million this financial year.

Mr Biskin said Russia’s decision to enter the Syrian war, obviously to defeat IS, was also to bolster support for the Syrian President, Bashar al-Assad.

He said this did not change Australia’s mission, but he admitted it had added to the “complexity” of the conflict.

The number of missions into Syria were “classified”, and there “have not been a lot”.

He said the rate of successful deployment of weaponry was in the “high 90s”.

Meanwhile, the government is considering an invitation to attach a warship to a French-led multinational naval taskforce in the Middle East.

Mr Binskin said that the invitation from France was for a ship to join Combined Task Force 50, based around the aircraft carrier Charles de Gaulle, conducting operations against IS targets in Syria and Iraq.

“We need to remember we actually do have a ship in the (Persian) gulf performing meaningful duties,” the air chief marshal told the Senate estimates hearing.