You are here: Home / Africa / AU calls for more funding for its peacekeeping mission in Somalia 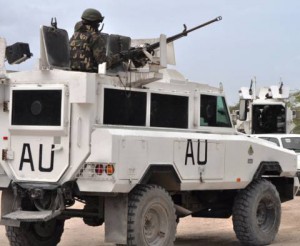 The African Union on Thursday appealed to the international community for more financial assistance to its peacekeeping mission in Somalia.

The Special Representative of the Chairperson of the African Union Commission for Somalia, Maman Sidikou, told journalists in Nairobi that the operations of the AU peacekeeping mission in Somalia (AMISON) are costly and require more international aid.

“We need more resources to motivate the soldiers and provide logistical support to enable our troops to wage a successful war against the militants,” Sidikou said.

The AMISION is fighting alongside the Somali forces against Islamist militant group Al-Shabaab in southern Somalia.

The AU envoy said the joint forces were “performing very well” in their operations.

Al-Shabaab has continued to wage attacks against the Somali government though it has lost most of its strongholds.

Last month, its members carried out a car bombing on a luxurious hotel in the capital Mogadishu that killed 15 people — its latest attack in the country.

The AMISOM this week announced that it would offer training to 150 officers of the Somali police force who will be deployed to the newly retaken areas in central Somalia.