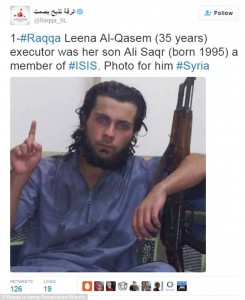 In the long litany of barbaric acts that Daesh have carried out, the latest example of a militant killing his mother must stand out as one of the most shocking. Yet while the act itself is astonishing in its depravity, the method behind the madness is clear.

In an editorial published today, a daily newspaper was referring to a Syrian woman, Lina Al Qasem, who tried to get her son Ali Saqr to leave the group. “In response, he reported her to Daesh authorities in Raqqa, who arrested her, put her on trial for apostasy and then had her own son carry out the death sentence in front of a crowd,” said The National.

This is Daesh’s attempt to place a veneer of legality over the crime, to legitimise their barbarism through a process. The end result of that process is to both instill fear into the population of Raqqa, silencing even the words between a mother and a son, and to bind militants ever more strongly to the group. Like a cult, Daesh needs its members to tie themselves to the group instead of their own families, said the paper.

In the past few days, Daesh’s tactics have also been revealed beyond the group’s heartlands. The group claimed responsibility for two suicide bombings in Libya, as well as attacks on tourists in the Egyptian Red Sea resort of Hurghada.

“The method in these tactics is clear, but even then they can still work. In Egypt, by targeting tourism, Daesh hopes to sabotage a key leg of the recovering economy. They know that tourism is always a soft underbelly of a country’s economy, and that even a small crisis or the perception of one can affect the number of tourists,” it added.

The editorial continued, “This is what Daesh have sought to do in Tunisia. The destabilisation of national governments is a key strategy of the group, because in the chaos of states without the rule of law, they find easy recruits, can spread their poisonous ideology more easily and find it easier to acquire weapons.

“In Libya, the tactics are related. By attacking civilians and police recruits – a well-rehearsed tactic from the insurgency in Iraq – the group is seeking to sow discontent at a particularly pivotal moment, even as rival Libyan groups are talking about a reconciliation government.”

In conclusion, the editorial said that these tactics, at home and abroad, are difficult to combat, even when they are revealed, “all the more reason why the group must be tackled in Syria and Iraq, before they have a chance to spread.”