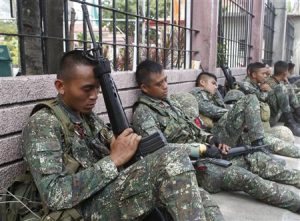 As the Islamic State’s (IS) territories continue to shrink in the Middle East, culminating in the loss of its stronghold Mosul in Iraq on Jul 10, its followers are hitting Southeast Asia in an attempt to show that it still exists, like reported by channelnewsasia.com.

In Indonesia, scores of police officers have been killed by IS followers – in suicide bombings in Jakarta in May and in knife attacks in Medan in June.

In the southern Philippines, IS-linked fighters have laid siege to Marawi city for almost two months now, killing more than 500 people so far.

Warnings by Southeast Asian governments of attacks by returning IS foreign fighters are now unfolding in the region.

“IS has always targeted the police but in recent times, they have stepped up calls for attacks against the police via social media and we have seen an increase in attacks,” the source added.

There are about two million IS members in Indonesia, according to terrorism expert Al Chaidar from the Malikussaleh University in Aceh.

“All these attacks were carried out by IS sympathisers … to bring the message that IS still exists,” Martinus Sitompul, Indonesian police spokesman, told Channel NewsAsia.

ISLAMIC STATE AT ITS “MOST DANGEROUS” FOLLOWING MOSUL LOSS

The Iraqi city of Mosul was where IS leader Abu Bakr al-Baghdadi declared an Islamic caliphate in 2014 and pronounced himself the leader of the world’s Muslims.

Three years on, with the loss of Mosul, analysts warn that the IS group is now at its most dangerous in Southeast Asia.

“The most dangerous people are the ones who have lost. They are not rational,” said independent Indonesian counter-terrorism and Middle East analyst Hasibullah Satrawi. “If we can understand this psychological aspect, you will see that we are now facing a much bigger danger.”

“Defeat is not in their vocabulary and they only want to carry out attack after attack as they believe it will lead them to heaven.”

Indeed, Indonesian police spokesman Martinus Sitompul told Channel NewsAsia that the recent attacks in Southeast Asia were carried out by IS sympathisers, “to bring the message that IS still exists.”

Hasibullah also warned that returning fighters are citizens who have rejected their own governments.

“Returnees from Syria and Iraq are people who reject their own country and the concept of a nation state,” said Hasibullah.

“They only believe in an Islamic state and they see the respective ASEAN countries as an infidel state which must be crippled through war. This is a problem and challenge to all ASEAN governments,” he added.

Attacks are also being carried out by lone wolves who are radicalised online, in response to IS’ call to strike in their own country if they cannot make it to the battlefield in Syria.

GLOBALISATION OF MILITANTS IN THE REGION

Another challenge is the globalisation of militants in the region. For instance, recent calls for attacks in Malaysia are not made by Malaysian citizens but by Indonesians working in the country.

“In the past, calls for attacks were made by Malaysians. From the latest intelligence that we received, Indonesians living in Malaysia have been calling for attacks on Malaysian nightspots via Whatsapp and Telegram,” Ayob Khan Mydin Pitchay, head of the Special Branch counter-terrorism division told Channel NewsAsia.

Special Branch is the intelligence arm of the Malaysian police.

According to the police, an Indonesian citizen was arrested together with a Malaysian last February for plotting to use a vehicle bomb to launch attacks in Kuala Lumpur.

Ayob, who is Malaysia’s top counter-terrorism cop, has also found himself targeted by Indonesian IS followers in the country. In a Facebook post last month, militants called for his assassination and accused him of being an “infidel” who wages war against IS.

Since 2013, Malaysian police have arrested a total of 310 people for suspected links to IS, of which 52 are foreigners. Of the 52 foreigners, 21 are Indonesians.

Another 34 Malaysians have died fighting in Syria and Iraq for IS, of which nine died as suicide bombers.

Currently, 53 Malaysians remain in Syria and 17 children are among them. Another eight Malaysians have returned home.

Because it is now more difficult to travel to Syria, Malaysian and Indonesian police said IS followers are making their way to the southern Philippines – given its close proximity – to wage jihad.

“IS supporters from Southeast Asia will look for the easiest route to travel to fight for IS and the closest place is southern Philippines,” said Ayob.

They are aided by the pro-IS faction of the Abu Sayaf group led by Isnilon Hapilon who wants to take over Marawi and establish an Islamic state.

Foreign fighters from Malaysia, Indonesia, Chechnya and Arab countries are known to have taken part in the Marawi siege.

The Maute group’s attack is the biggest challenge facing Philippines’ President Rodrigo Duterte since he took office last June. The United States and ASEAN members have said they stand ready to help the Philippines counter the ongoing threat.