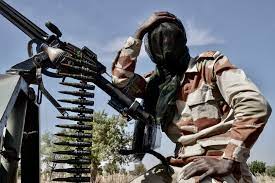 Unidentified gunmen have killed 16 soldiers and wounded six others in an ambush in southwest Niger, two security sources said on Sunday.

The attack on an army patrol occurred on Saturday afternoon in the Tahoua region of the West African country, near where raids killed 137 civilians in March.

It is unclear who carried out the attack, but the area is overrun by jihadist groups with links to al Qaeda and Islamic State.

Those groups have killed hundreds of soldiers and civilians since 2018 when they began broadening their reach beyond bases in Mali. Now, large areas of Mali, Niger and Burkina Faso have fallen under their control.