You are here: Home / Africa / Attackers in northern Mali kill 2 soldiers, wound 2 others 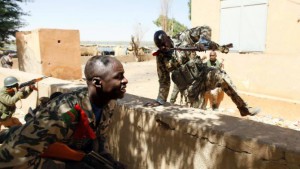 An official in northern Mali says assailants have attacked soldiers escorting a humanitarian convoy, killing two and wounding two others.

It wasn’t immediately clear who was behind the attack, although groups with links to al-Qaida are active in the area.

Moussa Maiga, a civil servant in the town of Timbuktu, said the violence took place early Friday as the soldiers guarded a humanitarian mission aimed at helping refugees returning to the area from neighboring Mauritania.

Many Malians from the north fled during the 2012 reign of Islamic extremists groups. While a French-led operation forced them from power the following year, violent attacks on peacekeepers have been growing.