Terrorist attacks in Mali, including a brazen assault on the headquarters of the fledgling Sahel counterterrorism force, cast a spotlight on the Islamist extremists roaming Africa, like reported by dw.com 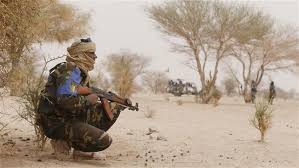 Mali has experienced a number of deadly extremist attacks in recent days. Three people were killed in a car bomb attack on the G5 Sahel force command post in the town of Sevare on Friday. The al-Qaida-linked Support Group for Islam and Muslims claimed responsibility for the attack.

Four Malian soldiers were killed on Saturday when their vehicle hit a land mine. An attack in northern Mali targeting French forces killed four civilians on Sunday and wounded more than 20 people, including French soldiers.

The latest wave of extremism coincided with a summit of the African Union (AU) in Nouakchott, the capital of neighboring Mauritania, which focused on ways to tackle corruption and extremism.

Macron in Nouakchott for talks

The leaders of the G5 Sahel states — Mauritania, Mali, Burkina Faso, Niger and Chad — held talks with French President Emmanuel Macron in Nouakchott on the final day of the AU summit.

The G5 Sahel force was set up with the help of the French last year to crush jihadist insurgents and criminal groups in the vast and unstable region. It aims to deploy 5,000 troops. It will operate alongside France’s 4,000 troops in the troubled border area between Mali, Niger and Burkina Faso and the 12,000 UN peacekeepers in Mali.

Macron also met with the AU Peace and Security Council to discuss the fight against Islamist extremism in Africa, as well as ways to better finance peacekeeping and counterterrorism operations.

“Our thoughts are with our Malian friends after tragic and cowardly attacks,” Macron said. “Several French soldiers were injured and are being evacuated. The first victims are Malian civilians.”

Several years after the G5 Sahel force was conceived by African countries, the French leader set the ball rolling on international donor pledges in mid-2017. It is some time since the UN warned the force was behind on its mandate.

The Sahel is experiencing a rising tide of Islamist extremism as the force limps into action. The developments in countries such as Mali are closely watched in other regions of the continent facing a similar pattern.

Morocco’s Foreign Minister Nasser Bourita, in an interview with DW, said Monday that Maghreb states are willing to work with the G5 Sahel group.

In the Niger River valley, in particular,  jihadist and  inter-communal conflicts are contributing to the overall insecurity in the West African nation preparing for elections on July 29. Attacks where jihadists target French troops in Mali are frequent.

“The big strategic question is: Can France help the countries of the G5 Sahel accelerate and strengthen deployment of their new military force? The big challenge at the moment is to strengthen the G5 joint force to help reinforce security,” Paul Melly, an Africa analyst with Chatham House in London, told DW.

Across Africa, Islamist extremism is intertwined and seen to be emerging as far afield as Mozambique to the south. Some of the larger outlawed groups include Boko Haram in Nigeria and al-Shabab in Kenya.

“It is clear that al-Qaeda, with more than 6,000 fighters, is active throughout Africa today, I would also say that IS [so-called Islamic State]) has more than 3,000 fighters within its ranks in Africa,” he told DW.

In many instances they were former IS fighters returning from Syria or Iraq. “And that does not include those who have joined al-Shabab or Boko Haram.”

Experts increasingly view terrorism in Africa as homegrown and not necessarily driven by an Islamist ideology alone. Mali has seen what one expert describes as an Islamization of criminal structures. The groups are entrenched, and military solutions alone are often seen to be ineffective.

“When on looks at terrorist groups that are active in Africa, they didn’t fall from the sky and were not transplanted from elsewhere. These are groups that are rooted in their respective areas,” said Mark Engelhardt, an author and expert on terrorism in Africa.

“In the Sahel there is this new group, the one that claimed responsibility for the G5 Sahel attack, that is a coalition of well-known personalities. There is Mr Marlboro – known also as Mokhtar Belmokhtar – who started out smuggling cigarettes, and since then, people and weapons or anything of value,” said Engelhardt.

“Or, Iyad Ag Ghaly, who is reputed for switching alliances. Why? because it’s all about money.” The fanatical preachers and their followers in these parts are being welcomed with open arms as “fighters for free, or at least little.”

The reasons terrorism is taking hold in Africa are manifold, according to Morocco’s foreign minister. He listed economic underdevelopment, population grown, a rise in separatist and other resistance movements, as well as criminal activity.

“Morocco and various neighbors in Africa jointly developed a strategy against terrorism. There are several solutions to the problem of IS: military solutions, also propagandist solutions and we are seeking to rebuild the areas that were destroyed by IS. These initiatives should be extended to other African states,” Bourita said.

“Cooperation with the G5 Sahel group  should be expanded,” he added.

Experts have long warned that areas that are unregulated or neglected by African governments are especially prone to jihadist influence.

“One example is the story of Boko Haram or that of al-Shabab in Somalia. It is an entirely similar story, each of course specific to that country. But the point is that these groups are rooted in what is wrong with these countries,” said Engelhardt.

“People don’t want war or gruesome terror, but they are fighting for their existence and at the moment they only have these terrorists on their side.”

Parallels are being drawn between the instability in northern Mozambique, where jihadist militants have gone on the rampage in recent months, and Nigeria’s experience with Boko Haram. Kenya’s north-east coast — home to a marginalized Somali minority —  is also seen as vulnerable to the influence of al-Shabab.

“What happens is the same dynamic we are seeing in Mali,” said Engelhardt.