You are here: Home / MidEastGulf / Attack on Iraqi military base kills at least 15 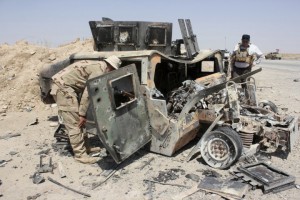 Attacks by five suicide bombers on an Iraqi military base north of Baghdad on Sunday killed at least 15 members of the security forces and wounded 22 others, security sources said.

Two of the bombers detonated their vehicle-borne explosives at the western gate of Camp Speicher, a former U.S. base outside the Sunni city of Tikrit.

Three others exploded themselves after entering the section of the base where Iraqi police are being trained, police and military sources in the Salahuddin operations command said.

Islamic State, the militant group controlling swathes of Iraq’s north and west, claimed responsibility for the blasts in a statement distributed by supporters online.

It said it targeted “trainers from the rejectionist army”, a term used by the Sunni insurgents to describe Shi’ite Muslims.

Iraq is gripped by a sectarian conflict mostly between Shi’ites and Sunnis that has been exacerbated by the rise of the ultra-hardline Sunni insurgents of Islamic State.

Camp Speicher became a symbol of the group’s brutality and hatred for Iraq’s Shi’ite majority after as many as 1,700 soldiers from the base were killed in mid-2014 during the militants’ lightning advance across the Syrian border.

Iraqi forces retook the centre of the western city of Ramadi last week, a victory that could help boost Prime Minister Haider al-Abadi, who has been rebuilding the military after stunning defeats in the face of Islamic State.

Iraq’s Defence Ministry said Islamic State has stepped up suicide blasts in response to setbacks in Ramadi. It said in a statement the group had used 22 bombers in two recent failed attacks in Anbar where Ramadi is located. The military responded, killing at least 42 militants including the bombers, the ministry said.