You are here: Home / FakeNews / “Attack of the trolls” 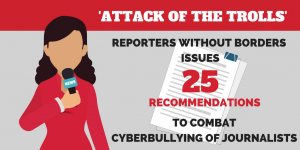 Over the last couple of years, online disinformation has risen on the international scene as an ever-growing problem, like reported by euvsdisinfo.eu. At the forefront of the battle for the value of facts are journalists, upholding one of the most important pillars of a free and democratic society: free and independent media.

Reporters Without Borders (RSF) and their partners launched an initiative earlier this year aiming at combatting disinformation: #JournalismTrustInitiative. RSF also recently published a new report called “Online Harassment of Journalists – Attack of the Trolls”, on the topic of online attacks against journalists, in which they present 25 recommendations directed at governments, international institutions, online platforms, media organizations and advertisers.

In the report, the modus operandi of the press freedom predators who orchestrate their online attacks against journalists are defined in three stages by RSF:

The report also includes a tutorial for journalists on how to deal with troll armies, and gives an overview of the authoritarian regimes that make use of them. RSF also concludes that female journalists are more likely than male journalists to be targeted with harassment, and the harassment targeting women is often degrading and contains threats of a sexual nature. The 25 recommendations are formulated with the aim of addressing these new digital threats.