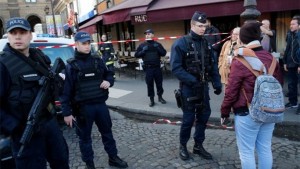 A group of four French soldiers were attacked Friday inside a shopping mall beneath the Louvre Museum in Paris by a machete-wielding man shouting “Allahu akbar,” authorities said to foxnews.com.

One of the soldiers suffered minor injuries and the attacker was gravely wounded. A military spokesman said the soldiers tried to fight off the assailant before opening fire.

The investigation is in its early stages, but the head of police told Reuters that– based on the attackers remarks– authorities believe the suspect wanted to carry out a terror attack at the famed museum.

The attacker was carrying 2 backpacks, but neither had explosives.

It is believed the suspect acted alone, but Reuters reported that a second person was arrested.

“We are dealing with an attack from an individual who was clearly aggressive and represented a direct threat, and whosecomments lead us to believe that he wished to carry out a terrorist incident,” Michel Cadot,  the head of the police force, said.

Interior Ministry spokesman Pierre-Henry Brandet said that a second person also was arrested but it is unclear whether they were linked to the attack.

Brandet said about 1,000 people were inside the actual museum and were held inside in safe areas. He also said the identity and nationality of the attacker was not immediately known.

Olivier Majewski was just leaving his scooter in the parking lot beneath the Louvre when he saw a crush of people, 30 or 40, running and screaming “there’s been a terror attack.” The 53-year-old said he hid for about 15 minutes before gingerly making his way upstairs. He said people were clearly scared.

“They were panicked,” he said.

The museum in the center of Paris is one of the French capital’s biggest tourist attractions.

Soldiers on patrol are part of security measures that have beefed-up in the wake of terror attacks in France in 2015 and 2016.

A spokewoman for the museum told The Telegraph that it was “closed for the moment” but would not confirm reports it had been evacuated.