You are here: Home / Mediterranean / At UN, Libya warns of ISIL’s increasing influence, calls for unanimity to end region’s crises 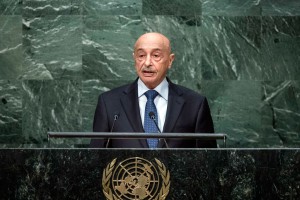 In his address at the annual General Debate of the United Nations General Assembly, Libya’s Acting Head of State, Agila Saleh Essa Gwaider, reported on the “overwhelming threat” posed by the Islamic State of Iraq and the Levant (ISIL), which is hindering Libya from becoming to a transparent democracy.

“We in Libya represent a fledgling democracy seeking to find its way in order to take hold as an added value in the minds of people and to transform it into transparent, democratic, effective and stable institutions,” said Mr. Gwaider.

However, he noted that the spread of weapons and armed groups – some of which turned to criminal and terrorist behaviour, in addition to those that exploited the situation because of personal interests – has resulted in the spread of chaos in the country and has weakened central authority.

He said that over the past year, Libya has witnessed the emergence of ISIL, or Da’esh, which asserts control over the towns of Derna and Sirte, aiming to secure them as bases from which to impose its will on the rest of the country, in addition to exploiting the area’s resources.

“This entity aims at stretching from Mauritania to Bangladesh and making the whole region subject to the law of the jungle, claiming it as the ‘Rule of Islam’. This ideology is totally rejected and resisted by the Libyan people with all power available under the leadership of the legitimate authorities, represented in the elected House of Representatives, and the government emanating from it,” he underscored.

He also noted that external powers have been hampering Libya’s attempts at fighting terrorists, including the UN Security Council, which displayed indecisiveness in approving requests by the Libyan government to exempt it from the arms embargo.

Mr. Gwaider added that terrorist groups such as ISIL and Al-Qaida look to spread beyond Libya to North Africa, the wider Sahel region and even Europe.

“Therefore, all United Nations members should be aware of the gravity of the position taken by the Security Council… and exercise pressure for the lifting of the arms embargo on the Libyan army, or speed up the approval of applications for exemption from the arms embargo, and provide assistance to the Libyan government in the area of security, according to the provisions of Security Council resolution 2214 (2015),” he urged the world leaders.

He also called for coordinated action to resolve the refugee and migrant crisis that is spreading across Europe.

“We also emphasize that the humanitarian crisis needs to be addressed in a comprehensive manner, in consultation amongst the countries of origin, countries of transit and countries .of destination. Taking into account the need to address the root causes of illegal migration in general, and the reasons for the large increase in the numbers of migrants through Libya in recent months,” he said.