You are here: Home / Mediterranean / ‘At least seven’ killed in attack on Libyan electoral commission offices 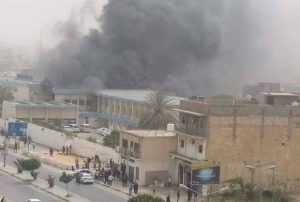 At least seven people were killed in an attack on Libyan electoral commission offices in Tripoli, a spokesman said like reported by euronews.com.

A group of militants, including at least two suicide bombers, stormed the building and set fire to it.

Security forces then engaged in a gun battle with the assailants for control of the offices.

“I saw two suicide bombers myself… they were shouting Allahu Akbar (God is greatest),” said spokesman Khaled Omar, who fled the building during the attack.

“The incident resulted in seven killed — three from (the commission’s) staff and four members of security forces,” he added.

There was no immediate claim of responsibility for the attack.

The electoral commission has been registering voters ahead of new elections that the United Nations says it hopes can be held in Libya before the end of the year.