You are here: Home / Africa / At least 80 killed in Boko Haram strikes in Nigeria 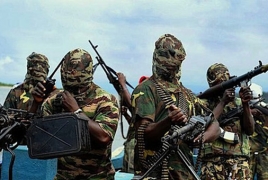 Another twin suicide bombing killed at least 30 people in Madagali, a town 150 kilometers (95 miles) southeast of Maiduguri, witnesses said. Danladi Buba said two women blew themselves up at a market near a busy bus station at about 9 a.m. Brig. Gen. Victor Ezugwu, the officer commanding in northeast Adamawa State, confirmed the attack but said casualties have yet to be established.

In Maiduguri, capital of neighboring Borno state, at least 30 were killed and more than 90 wounded in overnight blasts and shootouts, and another 20 died in a bombing outside a mosque at dawn Monday, said Muhammed Kanar, area coordinator of the National Emergency Management Agency.

The military said there were multiple attacks at four southwestern entry points to the city.

In another blast, two girls blew themselves up in the Buraburin neighborhood, killing several people, according to civil servant Yunusa Abdullahi.

“We are under siege,” Abdullahi said. “We don’t know how many of these bombs or these female suicide bombers were sneaked into Maiduguri last night.” He said some residents have found undetonated bombs.