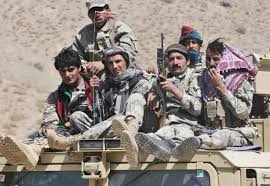 At least eight Afghan border police were killed and two others were injured when Taliban militants attacked an outpost in the Torkham border area of Afghanistan’s eastern Nangarhar province early Tuesday, officials said.

Spokesman for the Nangarhar provincial governor Attaullah Khugyani, confirmed the attack but did not elaborate on the number of casualties, Pajwok Afghan news reported.

Separately, at least 16 fighters of the ISIS group, were killed in Achin and Pachiragam districts in air and ground strikes, he said.

Ten ISIS group member were killed and four others wounded in the Upper Pachir neighborhood of the restive town. Two Taliban militants were killed as a result of an airstrike in the Bander locality of Achin, Khugyani added.