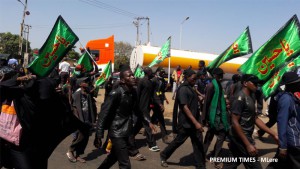 Authorities at the Ahmadu Bello University Teaching Hospital, Zaria, have said 60 bodies were brought to the facility after members of the Islamic Movement of Nigeria and troops of the Nigerian Army clashed on Saturday.

The hospital said 28 other members of the Islamic sect, who suffered various degrees of injuries, were also brought in for treatment.

“I can only confirm to you that 28 injured people from the incident are at the Accident and Emergency Care Unit and about 60 bodies at the mortuary, but I don’t have details of the names of both casualties and the injured,” the Chief Medical Director of the hospital, Lawal Khalid, a professor, told PREMIUM TIMES.

However, the Shi’ites sect is insisting that no fewer than 800 bodies of its members were deposited at the Ahmadu Bello University Teaching Hospital.

The President, Media Forum, Shi’ite Movement of Nigeria, Ibrahim Musa, said Monday that 87 women were among the dead.

“Report reaching us from the hospital revealed that 800 dead bodies were evacuated from the residence of the Leader of the Movement and Hussainiyya, the Secretarial of the Movement, and deposited at the mortuary of Ahmadu Bello University Teaching Hospital, Zaria,” Mr. Musa said.

“We call on international human right agencies to compel the Federal Government to hand over our captured leader who was seriously wounded by the Army as a result of gunshot on him to give him adequate Medical treatment themselves after the killing of his wife,”he said.

Mr. Musa said if the government failed to listen, the sect might take legal action to seek redress.

The exact number of casualty is difficult to independently verify at this time, with another source telling our reporter that the casualty figure had risen to at least 100 in all the locations raided by the military.

A PREMIUM TIMES reporter, who visited Zaria on Monday, said normalcy was gradually returning to the troubled city.

Some government offices, markets, shops and other commercial activities had resumed.

However, all banks in the city were closed when our reporter visited.

A resident, Hadiza Musa, described the last two days as hectic, adding, “We are grateful things are gradually coming back to normal.

“As I am talking to you now I am just from PZ area, I went round Samaru and came back to Tudun Wada area.”