You are here: Home / Africa / At least 18 killed in 2 separate clashes in Somalia by al-Shabab islamist militants 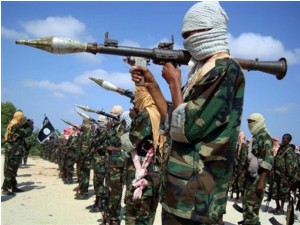 Two separate attacks in southern Somalia killed at least 18 people killed and wounded more than 30 others.

Near the port of Kismayo, at least 15 people were killed and 25 others wounded when al-Shabab militants mounted a surprise attack on a former military academy currently used as a base for forces of the regional administration in Jubbaland state.

Jubbaland’s minister for security and interior affairs, General Mohamed Warsame, told VOA his troops repulsed the al-Shabab attack and killed six militants, but lost nine of their own men in the battle.

The base that came under attack, 7 kilometers north of Kismayo, is located close to a Kenyan military base that operates AMISOM, the African Union Mission in Somalia.

The attack was believed to be linked to the recent eviction of people who had been living in the former Ministry of Works compound since 1991, after the collapse of the central government then in power in Mogadishu.