You are here: Home / West Asia / At least 18 dead in attack in China’s Xinjiang 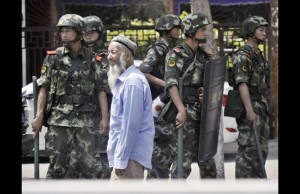 At least 18 people are dead after ethnic Uighurs attacked police with knives and bombs at a traffic checkpoint in China’s western Xinjiang region, Radio Free Asia reported on Wednesday.

The attack occurred Monday in a district of the southern city of Kashgar, where tensions between Muslim Uighurs that call the region home and the majority Han Chinese have led to bloodshed in recent years.

Suspects killed several police officers with knives and bombs after speeding through a traffic checkpoint in a car in Kashgar’s Tahtakoruk district, U.S.-based Radio Free Asia said, citing Turghun Memet, an officer at a nearby police station.

The attack comes at the beginning of the Muslim holy month of Ramadan, a sensitive time in Xinjiang after an uptick in attacks over the past three years in which hundreds have died, blamed by Beijing on Islamist militants.

Repeated calls to the Xinjiang government news office were not answered. Such incidents are frequently reported in overseas media but not confirmed by the Chinese government until days later, if ever.

Exiled Uighur groups and human rights activists say repressive government policies in Xinjiang, including controls on Islam and on Uighur culture, have provoked unrest, a claim that Beijing denies.