You are here: Home / MidEastGulf / At least 17 killed by Daesh car bomb near Syria-Turkey border crossing 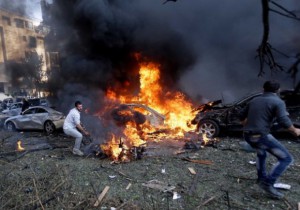 At least 17 people, mostly Syrian rebel fighters, were killed after a car bomb exploded near the Bab al-Salama crossing on the Turkish-Syrian border, witnesses and the Syrian Observatory for Human Rights have said.

The blast occurred late on October 13 near a Free Syrian Army checkpoint that is 2 kilometers from the border crossing, a major conduit for traffic between opposition-held northern Syria into Turkey.

Among at least 25 injured, eight were in critical condition and taken to Turkish hospitals across the border.

The border crossing is close to Azaz, a major stronghold of Turkish-backed and Western-vetted moderate Syrian rebel fighters who have been involved in a major operation fighting Islamic State (IS) militants in the area.

The attack came a week after an IS militant blew himself up at the Atmeh border crossing between northwestern Syria and Turkey.

That blast killed at least 25 people and targeted mainly Turkish-backed rebels fighting in Ankara’s Euphrates Shield campaign to push IS out of northern Syria.