You are here: Home / Africa / At least 15 killed in fighting between Somali army, al-Shabaab 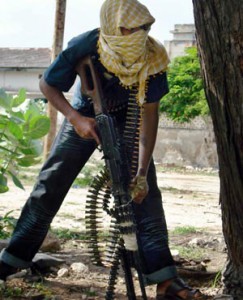 At least 15 people were killed early on Monday in clashes pitting Somali and African Union troops against the Islamist group al-Shabaab near the southern port of Kismayo, officials said.

Eight al-Shabaab militants were killed, said regional administration spokesperson Abdinasir Seerar. An unspecified number of security force members were also killed, he said, though it was not clear if they were soldiers or local police officers.

Witnesses said civilians were also among those killed.

Some of the Burundian AU soldiers and Somali police officers who were at the base were injured but repelled the attackers, Ali said.

The attack followed the killing of more than 50 Burundian peacekeepers in southern Somalia on Friday. Al-Shabaab spokesperson Sheikh Ali Mohamud Rage said on Sunday the group had their bodies and would publish photos of them.

The pro-insurgent radio Andalus said al-Shabaab had executed three men accused of spying on behalf of the United States and of helping its drones attack the group.

Hundreds of people witnessed the executions in the southern town of Saakow on Sunday, according to the report. It did not say if those executed were members of al-Shabaab.