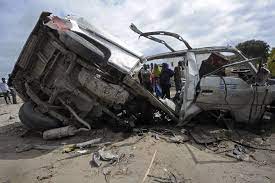 A minibus traveling outside Mogadishu, Somalia was blown up, killing at least 15 people and wounding four others, like reported by africa.cgtn.com.

The Somali Federal Government says the minibus exploded seconds after rolling over an improvised explosive device.

No one has yet claimed responsibility for Wednesday’s incident, however, the government said al Shabab is behind the attack incident.

Mohamed Ibrahim Moalimuu Spokesperson of the Federal Government of Somalia & Senior Media Adviser to the Prime Minister tweeted saying, “A heinous incident, a minibus which left Mogadishu this morning to Jowhar with civilian passengers was blown up by Al-Shabaab btw Balad district & Qalimoow around 50 KM north to Mogadishu. 15 innocent people were killed. This act is an indication to how ruthless terrorists are.”

According to police sources, the minibus could have been collateral damage, while the real objective of the jihadists would have been to attack the government convoys that patrolled the road.

The terror group is responsible for dozens of attacks in Somalia, including a 2017 car bomb attack in Mogadishu that killed some 300 people.