You are here: Home / Africa / At least 15 Al-Shabaab militants killed in foiled attack in S. Somalia 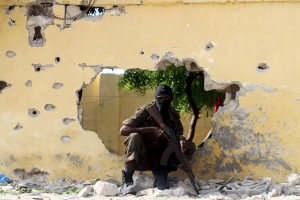 “This morning at 6:00 a.m. an attempt by Al-Shabaab to attack a police station at Qoryoley, Lower Shabelle was repulsed by the Somali government and AMISOM forces,” African Union Mission to Somalia (AMISOM) said on its twitter handle.

During the fighting, AMSIOM said they managed to kill 15 of the attackers, and confiscated weapons, while four of Somali government forces sustained injuries.

“The fighting was huge, where the both sides used heavy machine-guns, but the gunfire has stopped,” said Ahmed Deq, a resident in Qoryoley.

“It was about 6:00 a.m. We heard the sounds of heavy guns. Most of the residents remain indoors,”said Ali Abdi, another resident.

However, District Commissioner of the Qoryoley town Mohamed Hajj Osman told Xinhua that the Somali federal government army backed by AMISOM troops repulsed the militants’ assault, and confirmed that they lost one soldier during the assault.

“This was a planned attack which the Al-Shabaab militants had waged on the government bases. They wanted to take control over the town, but they failed. We inflicted heavy casualties on the militant’s forces. We lost one soldier and wounded several others,” Osman said.

Al-Shabaab, which is known to overstate its success, did not comment the attack.