You are here: Home / Africa / At least 11 killed as al-Shabaab tries to seize town in Somalia 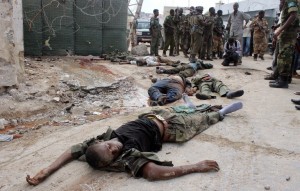 At least 11 people died Monday night when heavily armed insurgents of the Islamist militant group al-Shabaab tried to seize a town in south-eastern Somalia, police and witnesses said to eblnews.com.

Several others were injured when militants attacked soldiers and African Union troops in the town of Afgoye, 30 kilometres south-west of the capital, Mogadishu.

“Fierce fighting erupted at about 5:30 pm and is still taking place in and out of the town as militants attempt to enter it,” police officer Mohamed Amen told dpa by phone from Afgoye.

Among the dead were three Somali soldiers and eight militants, according to Amen.

“Many residents cannot come out of their homes. Roads and business places have been closed due to the clashes,” Muse added.

Afgoye used to be an al-Shabaab stronghold until 2012.

The group, which is seeking an Islamist state in Somalia and is affiliated with the international al-Qaeda terrorist network, launches regular attacks within the volatile East African nation.