You are here: Home / MidEastGulf / ‘At least 100 killed’ as Islamic State clashes with Syrian army in north 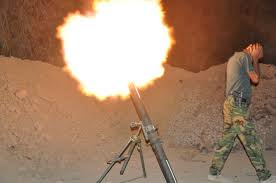 At least 100 combatants including 60 Islamic State fighters were killed in 24 hours of clashes as the Syrian army and IS battled for control of the key northeast military base of Kuwairis, a monitor said on Thursday.

Eight militiamen from the militant Lebanese Shia movement Hezbollah and 13 Iranians, as well as more than 20 Syrian soldiers died in the clashes at Kuwairis air base, east of Aleppo, the Syrian Observatory for Human Rights said.

Clashes and air strikes at the base were continuing, said the UK-based watchdog, which relies for its information on a network of activists and doctors in Syria.

On Tuesday, Syrian troops backed by pro-government militia reportedly penetrated IS lines west of the airport and reached government troops inside the base, breaking a more than one-year-long IS siege.

It was the Syrian army’s first major breakthrough since Russia’s air campaign against IS began on 30 September.

Experts said the base could be used by Russian planes in their air war against rebels fighting the rule of president, Bashar al-Assad, aiding their efforts to re-take Syria’s second city of Aleppo.