You are here: Home / Africa / At least 10 killed in car bombing of restaurant in Somali capital 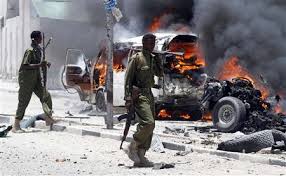 At least 10 people were killed when a suspected suicide bomber rammed a car laden with explosives into a busy restaurant in the centre of capital Mogadishu on Tuesday, police said.

The attackers targeted a small restaurant at lunch hour that is popular with government officials, about 1 kilometer from the presidential palace in the heart of Mogadishu.

The explosion also hit a small tea shop next to the restaurant and sent a huge plume of smoke above the city which lies on the Indian Ocean.

“The death toll is sure to rise,” said Police Colonel Osman Ibrahim at the scene. Police said was the attack was a suicide bombing.

No group has claimed responsibility but previous bombings in Mogadishu have been carried out by the Islamist al Shabaab rebel group.