You are here: Home / Africa / At least 1 killed in Mogadishu car bomb attack 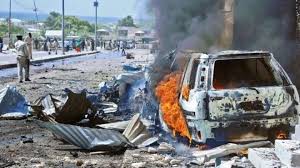 At least one government official was killed and another was wounded in a car bomb attack in Shibis district north of Mogadishu on Sunday morning, police and witnesses said.

According to police officer Abdiasiis Jama, Al-Shabaab militants are suspected to have planted explosives in the car.

“So far, we have no more details, but we will try to get more information. We heard that one of the two government officials inside the car was killed and the other was badly injured,” Jama said.

“We were sleeping when we heard the explosion. We knew that two government officials were in the car,” Mohamed Sheikh, a Mogadishu resident, told Xinhua.

So far, no one has claimed responsibility for the attack, but the Al-Qaida linked group Al-Shabaab has launched similar attacks in Mogadishu recently.

The insurgents once controlled much of Somalia before the African Union and Somali forces drove the group out of Mogadishu in 2011.