You are here: Home / Africa / At 6 dead as suicide blast hits mosque in northern Nigeria 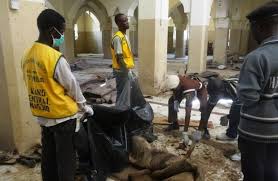 At least six lifeless bodies have been evacuated from the scene of an early Friday suicide blast at a mosque in Nigeria’s Maiduguri city, capital of the restive northern Borno State, the National Emergency Management Agency said.

The incident occurred early Friday as Muslim faithful gathered for the first congregational prayer of the day at Jidari/Polo area of the state, said a statement by the state-run relief agency.

Medical sources said more than 17 people have been hospitalized following the attack.

The explosion was carried out by a suspected suicide bomber whose two accomplices escaped when some vigilant members of the community accosted them on their suspicious movements, said a resident identified as Manaseh Adamu.

At least 29 people, mainly worshippers, were killed last week Thursday after two male suicide bombers hit a mosque in Molai axis of Maiduguri, according to officials.

The militant group Boko Haram was blamed for the attacks. The group, fighting against the government to create an Islamic state, has carried out waves of bombings in the northern region and capital city of Nigeria over the years.

Nigerian President Muhammadu Buhari has ordered military chiefs to end the insurgency of Boko Haram in the most populous African country by December. But local people are doubting the certainty of the deadline given to rout out the ruthless group as more suicide attacks had taken place in parts of Nigeria since the order was given in August.