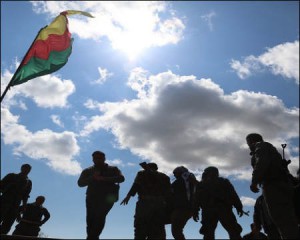 A Syrian minister has indicated that the Bashar al-Assad regime is willing to accept Kurdish autonomy in Syrian Kurdistan in the north of the war-torn country, where Kurdish forces have been engaged in fierce fighting with ISIS.

The minister’s comments come after he met with Kurdish authorities last month in the northern Syrian border town of Qamishli to discuss a range of issues.

In January 2014, Kurdish authorities declared the formation of three self-ruled cantons (Cizire, Afrin and Kobane) under the Democratic Self-Rule Administration of Rojava, which has been dominated by the Democratic Union party (PYD) and its People’s Protection Units (YPG) militia forces.

The political reorganization was not recognised by the Syrian regime; however it has become a de-facto reality, especially since pro-government forces withdrew from most Kurdish-populated regions in 2012, with the exception of Qamishli and the provincial capital Hasakeh 75 kilometers to the south.

Haydar expressed support for overt signs of local Kurdish authority in northern Syria, saying that he was “pleased at the site of Kurdish checkpoints on roads [since] they protect citizens.”

“There is no problem with [raising] Kurdish flags as long as they come within the framework of a united Syria,” he added.

However, the minister made sure to stress the “unity” of Syria and its “sovereignty” over the Kurdish-populated territory during his interview.

“My trip to Qamishli was a trip to a Syrian city on Syrian territory,” he said, adding that his visit aimed to “repair bridges between the Syrian leadership and the people of this area.”

Despite his conciliatory words, Haydar hinted that Damascus opposed the current administrative setup in Kurdish areas, saying that plans for autonomous rule “could be revised and altered since all the projects are designed to find a solution within the sovereign state of Syria.”

The Syrian minister also claimed that the Assad regime had been arming YPG units in their fight against ISIS, despite repeated statements by Kurdish figures that they have not received support from Damascus.

“We have been providing all possible military assistance for the Kurdish forces in order to empower them against terror,” Haydar said.

“Such statements undermine the victories of our people and obscure the regime’s secret stance opposing the Kurdish people and their autonomous democratic self-rule,” Nasser Hajj Mansour—a Kurdish defense official in the Cizire canton—told the pro-opposition Syrian Solution news agency.

“They want to make themselves partners in [Kurdish] victories and everyone was a witness to their attempts trying to attribute the [Kurdish] victories in Tal Hamis and Tell Brak to their army and Shabiha,” he added in reference to late-February Kurdish advances against ISIS in the Hasakeh province.